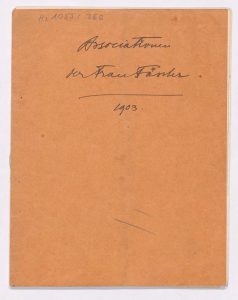 From his Zofingia lectures (1896-99) to his dissertation On the Psychology and Pathology of So-Called Occult Phenomena (1902) through to his 1905
presentation in Basel, “On Spiritualistic Phenomena”, Jung had a vivid interest in the psychology of clairvoyance and mediumship. In 1905, he noted that in recent years he had studied with several mediums:

This psychological interest of mine has prompted me to keep track of persons who are gifted as mediums. My profession as a psychiatrist gave me ample opportunities for this, particularly in a city like Zurich. So many remarkable elements converging in so small a space can perhaps be found nowhere else in Europe. In the last few years I have investigated eight mediums, six of them women and two of them men. (Jung, 1905, CW 18, p. 301)

Until now, little has been known regarding these mediumistic researches of Jung, nor even the identities of the mediums. Newly available archival material reveals the identity of one remarkable woman, with whom Jung had conducted a long-term study: Wilhelmine Fässler, a well-known medium in the German speaking world at that time. A German periodical wrote on her visit to Berlin in 1904:

Another interesting visit was that of the clairvoyant Wilhelmine Fässler from Zurich. She is on a journey to introduce her gifts to wider circles. She has already provided samples of her ability in Munich and Vienna and returns via Berlin and Hamburg back to her homeland. — Mrs. Fässler has conducted one session with us, to which forty people had been invited. […] Mrs. Fässler has a good ability to build a magnetic rapport with someone and to feel due to this rapport the physical state of this person in her own body. Her diagnoses are, besides the usual disruption during such experiments (of external nature, disharmonic auric currents, unconscious resistance of the subject etc.), suitable as a tool for medical diagnostics. Dr. Jung from the psychiatric clinic Burghölzli (where Prof. Forel used to work) has conducted 44 sessions with Mrs. Fässler and has got to know and cherish her gift as a clairvoyant.

Georg Sulzer, former president of the Swiss Court of Cassation, in his book Licht und Schatten der spiritistischen Praxis [Light and Shadow of the Spiritual Practice] (1913) recounts one of these sessions, to which he was invited at the request of Mrs. Fässler. The experiment took place in Jung’s flat:

At the examination that we undertook, Dr. Jung took me aside into the next room and told me very quietly to put the letter with the invitation to this examination he had written to me on Mrs. Fässler’s head. I did it, and she described a woman and mentioned a series of physical and mental characteristics as well as finally the diseases with which the woman was afflicted. Of course, I thought, she has erred completely this time. But I realised that Dr. Jung was sitting in his chair, lost in his thought. After Mrs. Fässler had finished her description, I was enlightened about the cause of this conspicuous behaviour, as he shouted out: “Wonderful, she has described exactly my mother, everything is right, characteristics and diagnosis, and she does not know my mother, who lives in Basel […]”

The substantial archive material on Jung’s work with Fässler consists of séance protocols, studies of her psychology and association experiments. There is a main manuscript that appears to be originally written up for publication, on the basis of the séances — something like a follow up study to his then recently published dissertation. It appears then to have been left to one side, probably when he rejoined the Burghölzli and got heavily involved in the associations experiment. The manuscript provides important information regarding the evolution of his methods of psychological investigation, including the use of methods not reported elsewhere in his work —such as soliciting associations to paintings and music. The inclusion of images in the associative method reveals the importance of the French psychologist Alfred Binet’s research for Jung, whereas the psychological application of music in this context appears to be completely novel and can be found nowhere else in Jung’s work. The files present Jung’s first detailed study of associations — much of this appears to be without measuring the reaction times, which would dominate his later studies. The manuscript is of great historical interest, as it shows the transition period from Jung’s researches into mediumship towards the association experiments, two areas of Jung’s research that only come together in this particular study. It also marks the shift from the detailed investigation of an individual case to the study of a large cohort. It can therefore be seen as the missing link between his dissertation and his researches in the association method, thereby shedding a light on the development of Jung’s theory of complexes.