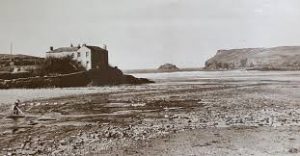 In the summer of 1923, Jung presented a series of fourteen lectures over the course of a fortnight in Polzeath in Cornwall, a beachside village on the estuary of the Camel river, to a group of about 30 participants. The subjects of his lectures was the technique of analysis and the historical effects of Christianity. He presented his most extended treatment of these subjects up to this point. The lectures were organised by H. G. Baynes and Esther Harding. From the recollections of participants, this was a memorable occasion. Barbara Hannah noted, “All of Jung’s pupils who attended it were still constantly talking about it, most especially Esther Harding, on whom it had made a deep impression.” Cary Baynes once referred to “the vigor and color of his speech all the directness and simplicity that come when as at Cornwall the fire burns in him.” Several sets of notes by various auditors exist, but until now they have not been collated, edited and published. This edition will draw together these notes to provide one comprehensive manuscript of Jung’s lectures, with contextual footnotes and historical introductions by Christopher Wagner and Sonu Shamdasani.